Anita Strasser is a Deptford resident and PhD student at Goldsmiths. Anita is writing a blog called Deptford is Changing   about the ‘regeneration’ of the area . Anita has spoken to some residents and businesses in the Achilles Street area- we are sharing the posts here.

The ballot regarding the demolition of the Achilles Street area opens today. It’s a YES or NO to demolition vote; refurbishment and infill is not an option. The demolition plans include the businesses on the parade on New Cross Road, but business owners aren’t allowed a vote. They have no say in the decision regarding the future of their businesses. A while ago, I interviewed Angelo and his nephew Marco – owners of the Launderette on 369 New Cross Road. I met Angelo in 2017, when he was still the owner (he handed it over to Marco in spring 2019). He told me about the Launderette.

“The Launderette itself has been here since the early 60s. It used to be a Father & Son operation with launderettes in different areas”, Angelo explains. “In the early 90s, my brother Joe bought this launderette and did a lot of refurbishing work, replacing the old machines with newer versions.” Angelo took over in 2008, and now, it’s in the hands of his nephew Marco. “It’s a contagious disease, I’m not joking”, Angelo laughs, and tells how many of his family and friends have become involved with launderettes. “It all started with my brother dating a girl whose father was of Italian origin and owned a string of launderettes. The relationship didn’t last but my brother thought ‘I’ll try that’.” His brother has since bought a few launderettes, including one on Jamaica Road which is now owned by another one of Angelo’s nephews.

Marco, who runs the New Cross launderette by himself now, wanted to carry on with the family tradition and took over the business in 2019. As soon as he started, he repainted and decorated the inside, but he hasn’t invested too much as he is aware of the development plans for the area. He also got to know his customers very quickly and built up nice relationships with them. He is particularly fond of Bill from Austin House, who comes in every Friday and tells Marco stories about the past. They also talk a lot about football. 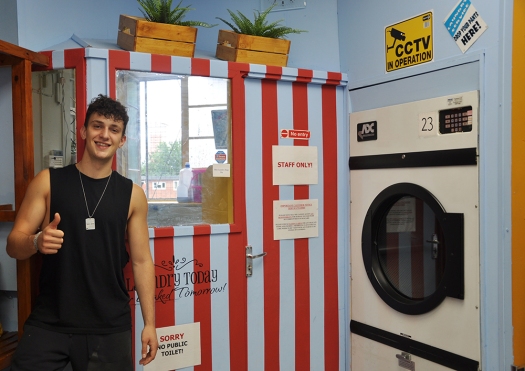 Taking over the business was a great opportunity for Marco, especially being 21 years old. But being in the Launderette business doesn’t make you rich. As Angelo explained previously, “a launderette business doesn’t grow like other businesses do, and it doesn’t have a high turnover. Most launderettes are surviving because they are on good locations in council properties with a reasonable rent. What kills them is the high market rates, so once the new development is here, with rent prices double if not triple, we won’t be able to return. Even if we are offered funds to relocate, which the council has, and new premises in the new development, the overheads will be too high to run it.” Another issue is, Marco explains, the 2-3 years it will take to redevelop the area, during which the business would be shut. Additionally, the machines wouldn’t be running during this time and might not work anymore afterwards, so he’d have to invest in new machines, which would cost a lot of money. “I don’t have the capital to do that so I doubt I’ll set up again!” Marco still has hope that he might be able to stay but says “we don’t have the power to decide that.”

As business owners, they say, they are keen to see investment in the area and people with more money coming in but this shouldn’t mean that others with less capital, including themselves, are priced out. They agree that the parade and the area needs investment but they know that this is due to the council not having done a lot for its upkeep. “It’s a nice parade but it’s stuck in the 60s”, Angelo states. Lewisham Council did commission the artist group ARTMONGERS a few years ago to spruce it up a bit. They came into the shops asking people what they’d like to see, and Angelo, together with the artist, designed the shop front we see today. “It really takes an artist to see things from a different perspective. I was just going to suggest some writing to advertise the services but the artists said no, we need something more interesting and then he came up with the design you see today. It really makes a difference”, he says. “But that’s all that’s been done. Lewisham Council doesn’t involve itself much in making the parade look nicer, they are more concerned with housing. The plans I’ve seen for this area – 5-storey blocks across the whole parade starting from The Venue – this is huge! And I’m pretty certain the development plans will go ahead and I’m pretty certain we won’t set up another launderette here.”

Many people might think that because of improved living standards there is no need for launderettes anymore. In actual fact, there is still demand, even if most people can afford a washing machine. “The association of launderettes merely with the working-class and people in social housing is outdated – we have customers from all walks of life. The demand today is due to convenience: the machines we have can handle high capacity and the laundry can dry quickly, so the whole laundry can be done in an hour. Drying is a particular issue today. Many people live in small flats with no space or facility to dry clothes so coming to a launderette solves that problem.” In this particular launderette the water is also treated before it’s used and people notice the change in the fabric, another reason, according to Angelo, why this launderette is doing good business. “If the launderette closes, people will have to travel further away for this convenience”, making this convenience less convenient. I immediately think of 90-year old Bill. Where will he have his laundry done? 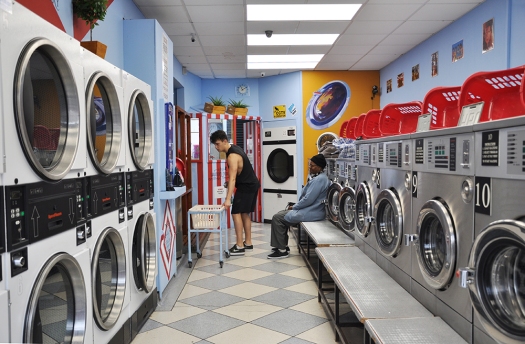 PHOTOS AND TEXT BY ANITA STRASSER